We’re having a great summer here at Old Friends in Kentucky. Some short heat waves have come through, but much of June and July has been pleasantly sunny and breezy, like today. It’s a perfect time to relax with a visit to admire some of the greatest former athletes in the world.

Like Game On Dude and Little Mike. These two deservedly popular stars, now twelve years old apiece, hold court in their big paddock near the front of the farm where they greet all who come and go. Literally. From their position on both the entry and exit routes for each tour, they often come over to spend time with their fans at the beginning of the tour, then just happen to be on the other side of their paddock as those same folks head back down at the end of the tour.

“Hi, we’re Dude and Mike, have we met before?

Silver Charm, War Emblem, Alphabet Soup & Gorgeous George, Einstein, Afternoon Deelites and his son Popcorn Deelites (alias “Seabiscuit”), Little Silver Charm, and all the gang are having a great time meeting, greeting, making new friends and renewing their ties with longtime friends. We also have some new stars who, at least at the moment, are all on the main tour route. (I say “at the moment” because we’re doing some shifting of horses into different paddocks. Any visit to the farm may introduce you to an unexpected horse or reunite you with an old buddy you haven’t seen for awhile.)

New stars just settling into retirement and the role of meeters and greeters, include:

A youngster by our standards, six year old Diversify earned nearly $2 million in 16 starts, including the Saginaw Stakes at Belmont Park, the Evan Shipman Stakes at Saratoga, the prestigious Jockey Club Gold Cup, the Suburban, and the Whitney. Pretty amazing list of honors. And by the way, he also won the Commentator Stakes (wonder who that race was named for?). Diversify is a big darkish bay gelding with a profile that suggests strong character. His retirement at Old Friends was enabled by his racing owners, Lauren Evans and her father Ralph M. Evans.

Another of our wonderful new guys goes by the unassuming name of Hogy.

But a name doesn’t always say it all. Ten year old Hogy won more than $1 million in his eight year race career. Starting his stakes wins with the Brian Barenscheer Juvenile Stakes at Canterbury Park, he moved on to take the Hansel at Turfway, the Hanshin at Arlington, the Troy and Presque Isle in New York, the Colonel Power at the Fair Grounds in Louisiana, the Kentucky Downs Sprint, Frontier Utilities Turf Sprint at Sam Houston, and Canadian Turf Stakes at Gulfstream. Besides all that, he’s a sweet guy with a beautiful face who we’ve fallen in love with from his first day with us.

The newest kid on the block is Soi Phet.

Pronounced “soy fet,” his name is no new one to his big fan base in southern California, or to lots of race fans all over the country, come to that. Soi Phet, eleven year old son of Tiznow’s full brother Tizbud, isn’t a big guy like his uncle. He’s a deceptively elegant, refined looking guy. “Deceptively” because he was one sturdy warrior on the track. He just about owned the Los Alamitos racecourse. He won two runnings of the Bertrando Stakes there, the Los Alamitos Mile, two consecutive E.B. Johnston Stakes, as well as the McCann’s Mojave Handicap and Crystal Water Stakes at Santa Anita, and the Harry F. Brubaker Stakes at Del Mar. If you’re wondering if he’s also a millionaire, the answer is a resounding yes. Beloved of fans, of his race owners the Benowitz family, Mathilde Powell and Paul Viskovich, and trainer Leonard Powell, Soi Phet is settling into his Kentucky retirement with beautiful grace and poise.

So if you can, run to Old Friends to meet our wonderful new stars, all of whom can currently be seen on the regular tours.

Or, if you’d rather, schedule a private tour and visit our delightfully sweet new ladies, Saudi Poetry and Silver Charm’s daughter, Classy Charm. Their paddock is too far to get to during the time allotted for regular tours, but they love visitors too.

We’ve had a sizzlin’, jumpin’ five day weekend at Old Friends.  This year’s Breyerfest at the Kentucky Horse Park concluded yesterday. It’s always a huge gathering of horse lovers from just about everywhere, and we’re fortunate to be a favorite side trip for many attendees. Others learn about us for the first time at our booth at Breyerfest, which this year in the 90 degree weather was staffed by Ken and Joyce (and maybe other steadfast souls of whom I’m not aware). This Breyerfest we were delighted to have many guests at the farm who said it was their first visit with us. Tour guides pitched in for double shifts, and the horses did their bit with their usual kindness and grace.

The horses are in laid-back summer mode. Nicanor is more into those group back scratches than ever. Touch Gold is ambling over at a lazy canter instead of a full charge, and our comedian team Popcorn Deelites and Special Ring are sauntering over at their leisure rather than waiting already in position, though once they arrive they’re doing their schtick with the usual flourishes. They know it inspires extra carrots, which go down nicely on a summer day. 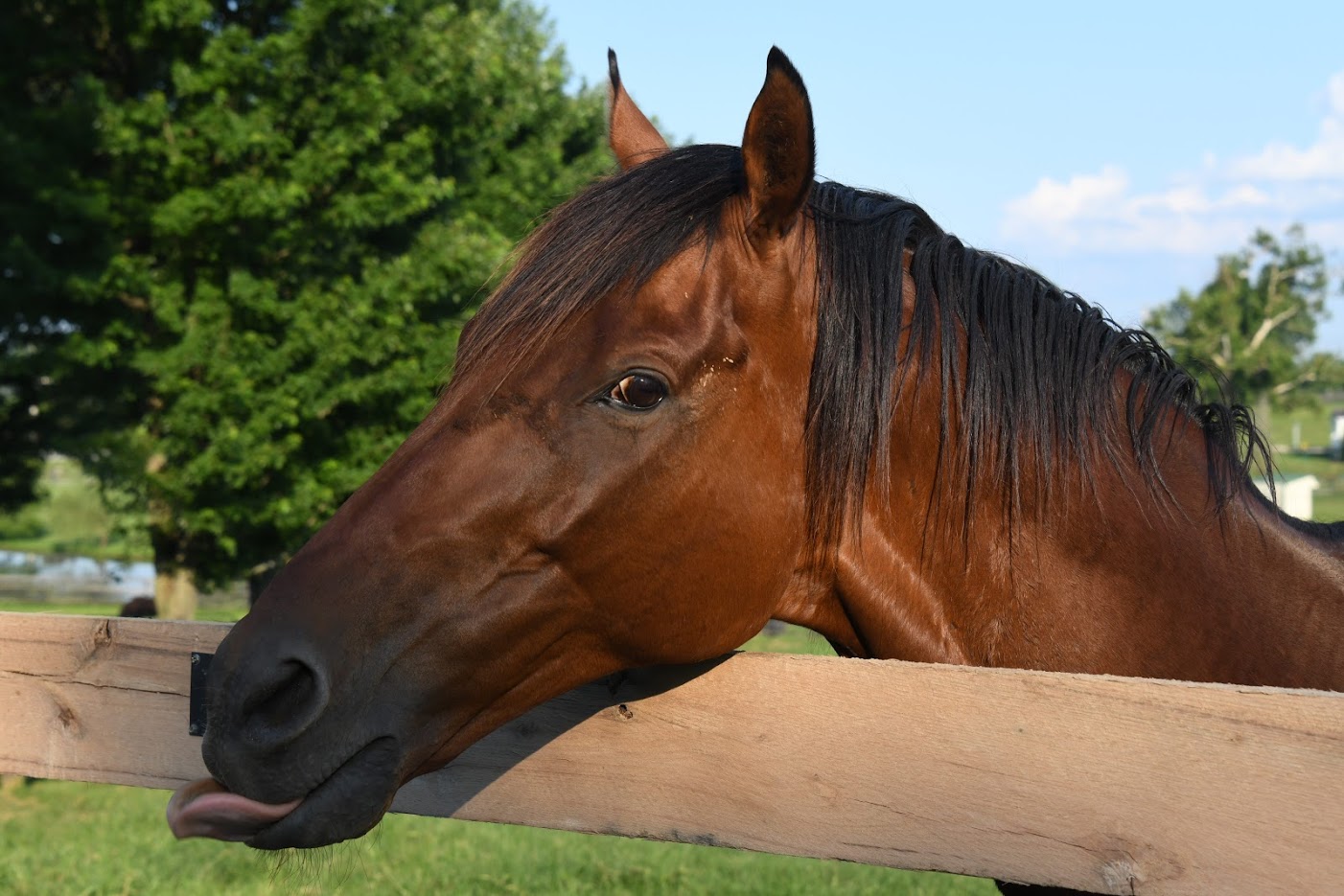 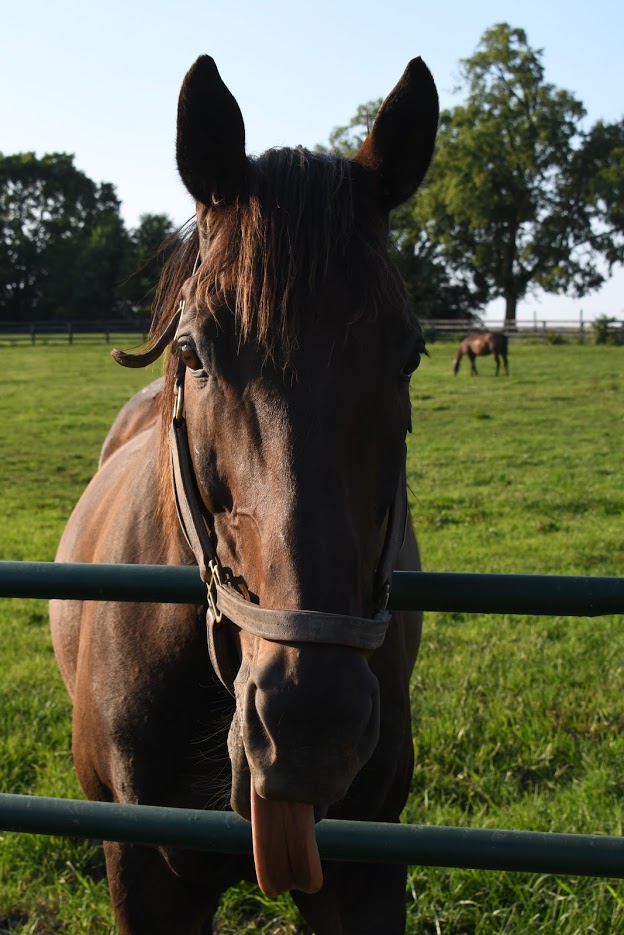 So does Comma to the Top.

The geese have pretty much raised their crop of goslings, who are now old enough to party. Unlike Touch Gold (click the sidebar for last April 11’s blog), Sun King and Old Friends Stakes winner Kalamos both happily play host to family expeditions away from the pond. 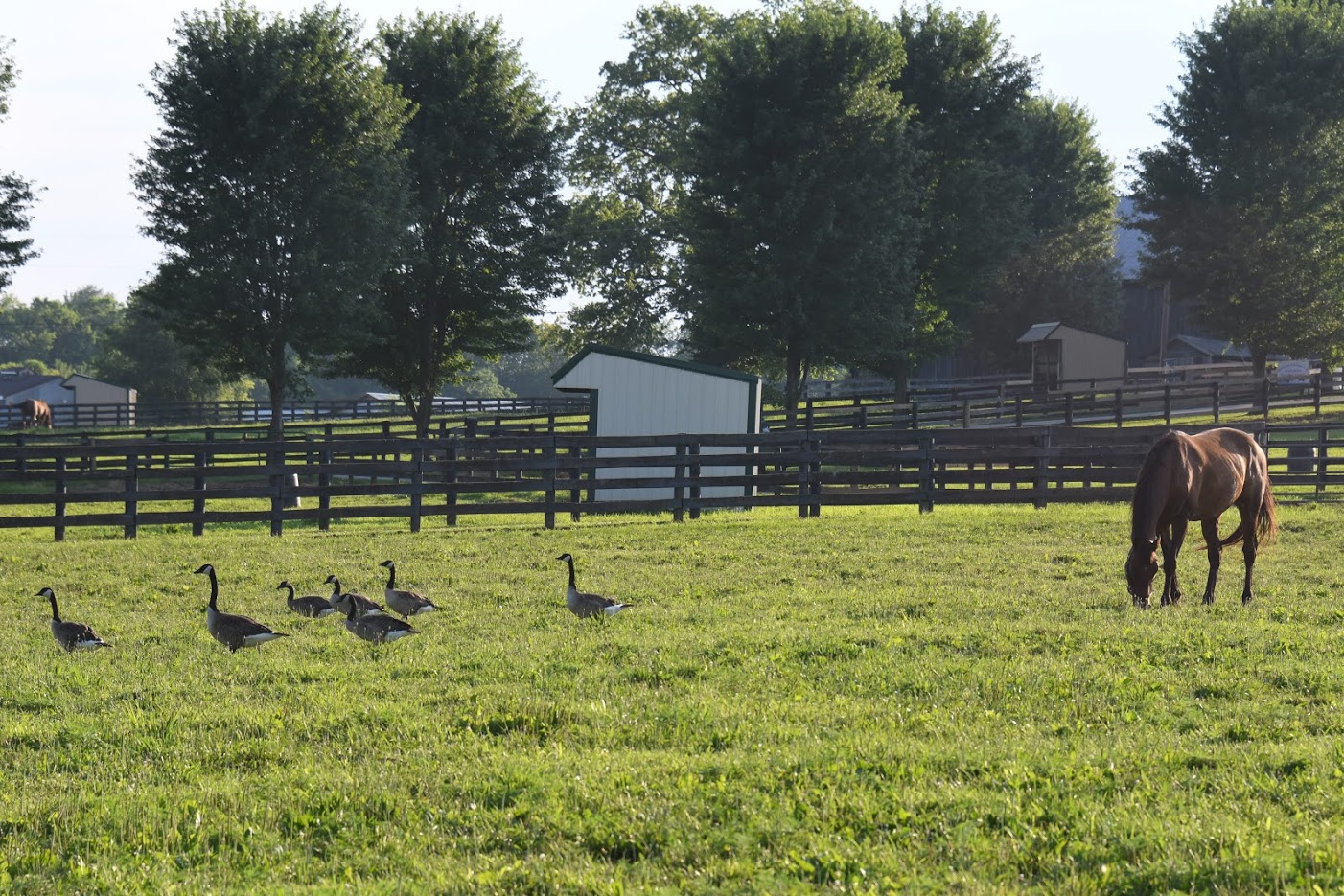 Nobiz Like Shobiz does not. But he sure knows how to look gorgeous. 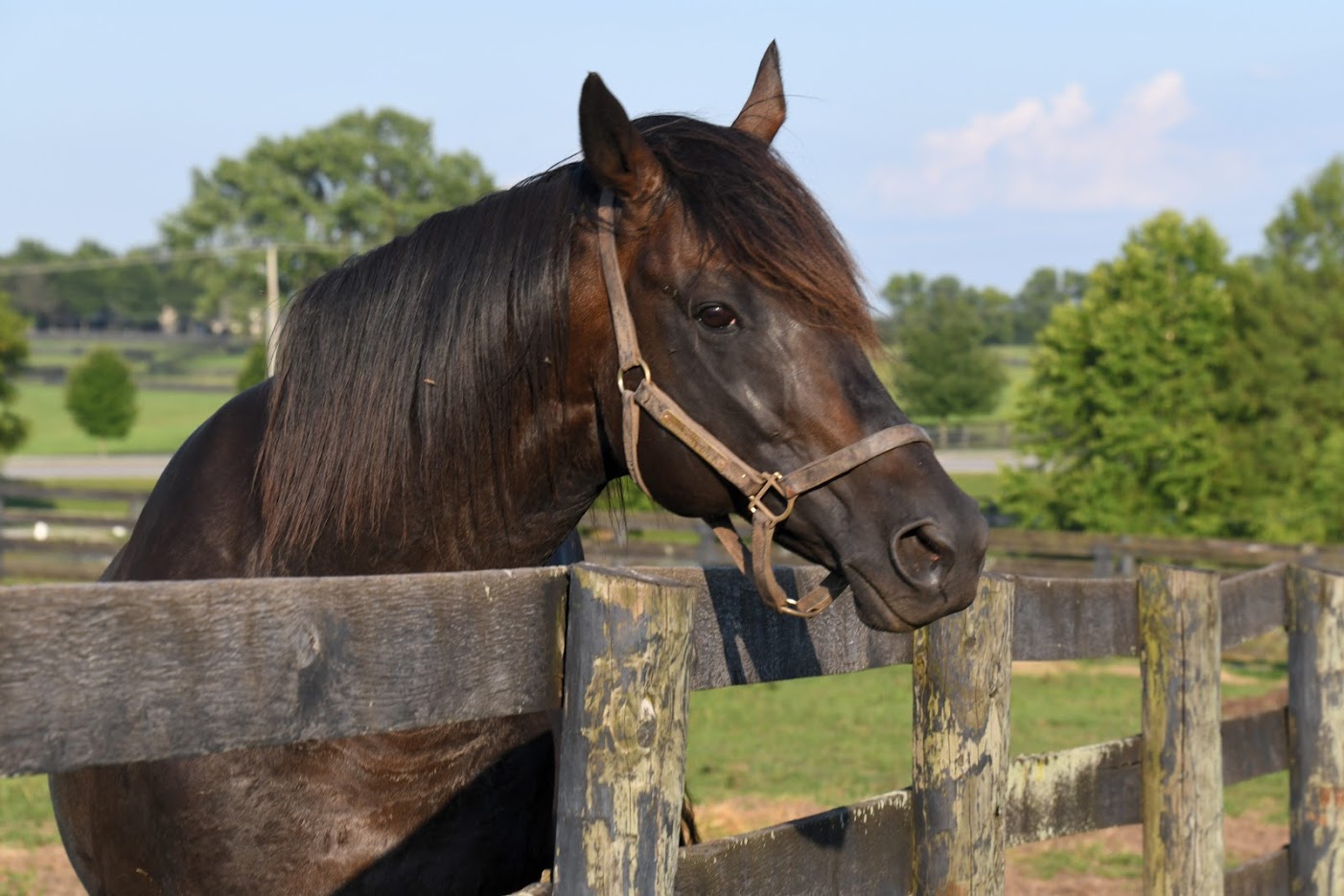 And sometimes Cherono looks so much like his grandpa Ogygian it brings a lump to my throat. 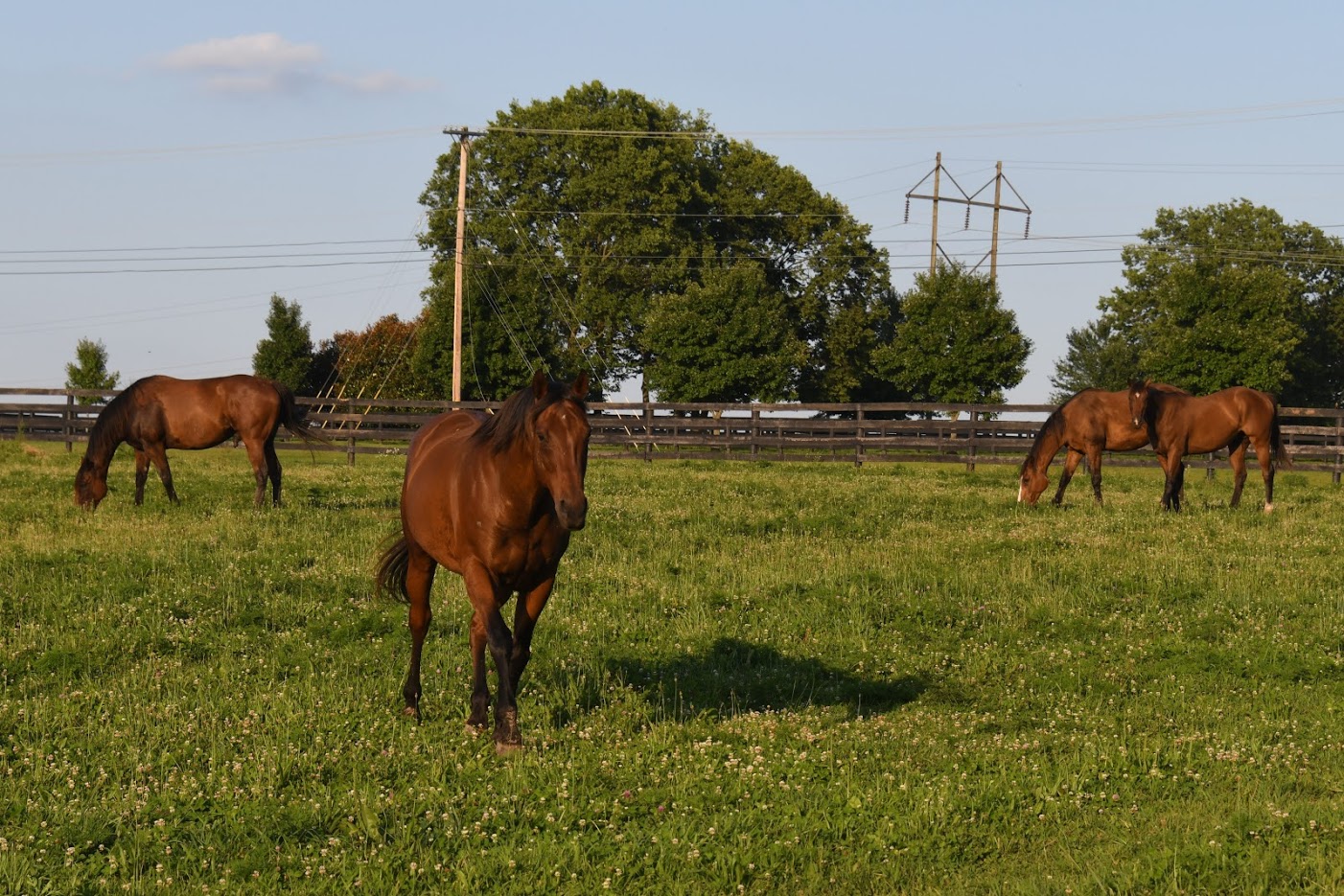 By the way, Cherono is the reigning leader of his herd, and one of the kindest herd leaders on the farm. Here you see him with his good friends (L to R) Lion Hunter, W. C. Jones and the very distinguished Rail Trip.

One paddock beyond theirs, new resident Hogy is seeing if he bonds well with Cost Affective, Rathor and Bunker’s Edge. If not, a new living arrangement will be tried. Tim and Carole are careful to make sure that paddock companions make a compatible fit. I apologize for not having a photo of Hogy. He’s a good looking guy with a strong resemblance to his close relative, Sarava. (Hogy’s taller though). 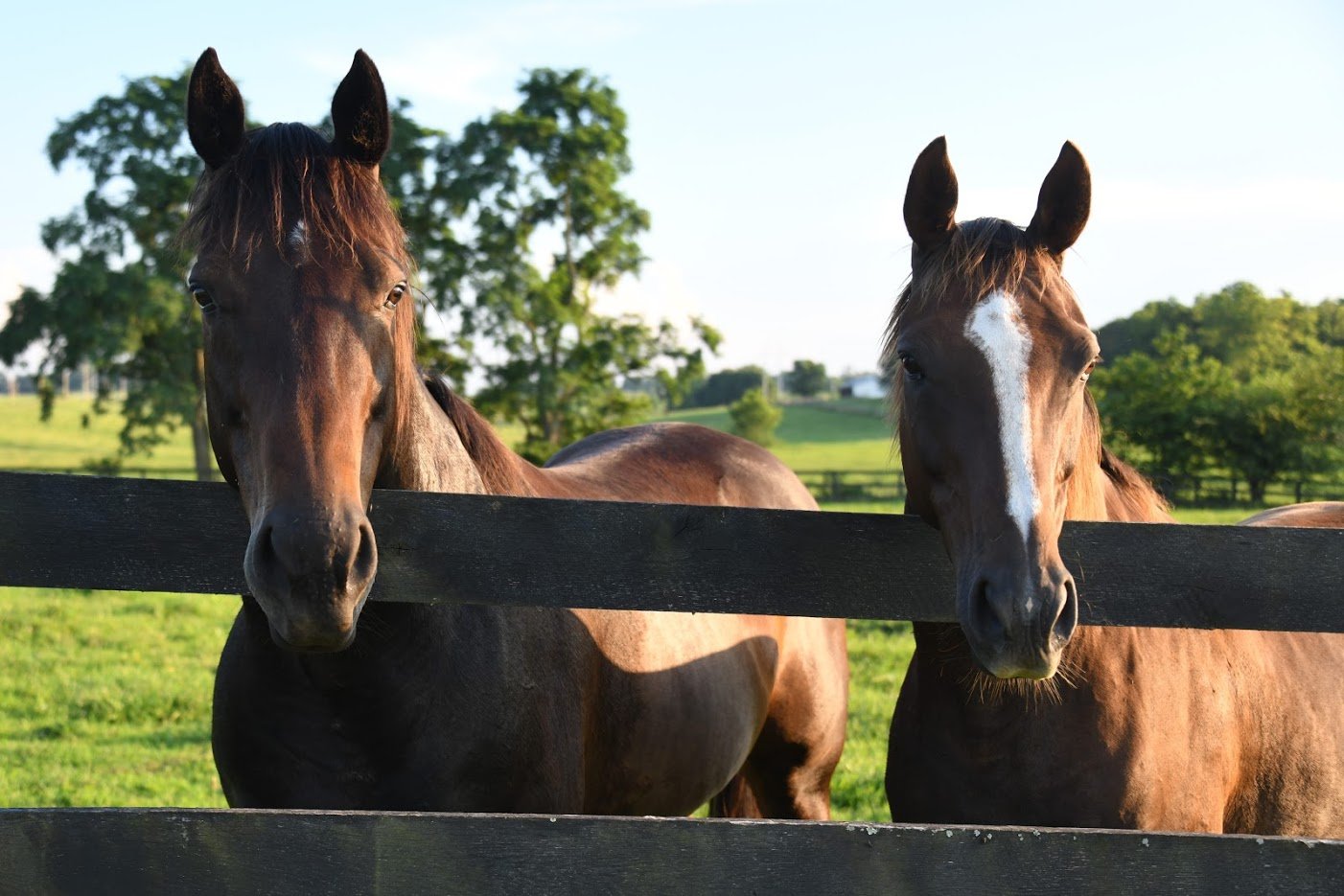 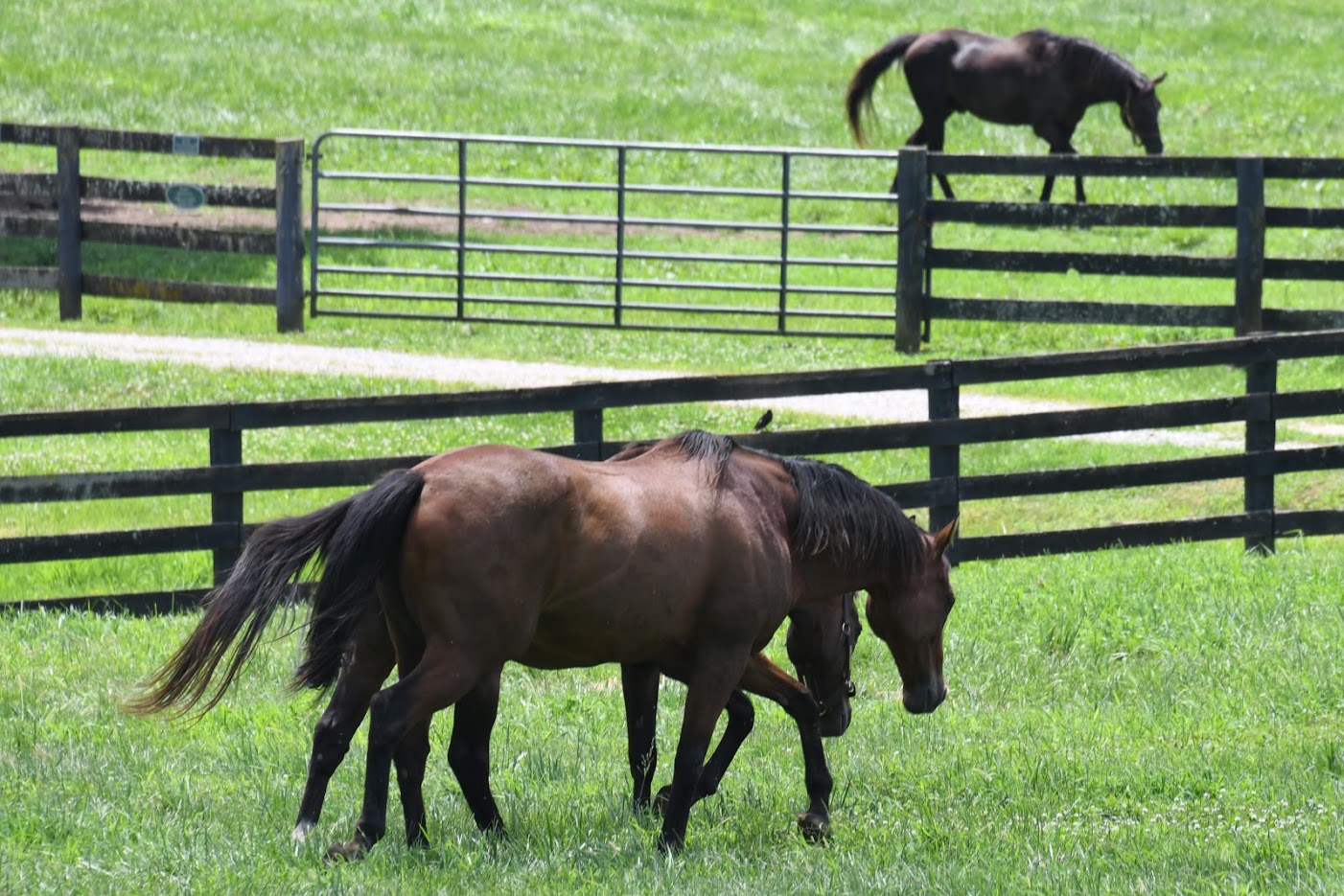 We love it when everybody gets along (Game On Dude & Little Mike. Sarava in the background)

Summer is a good time for dust baths. 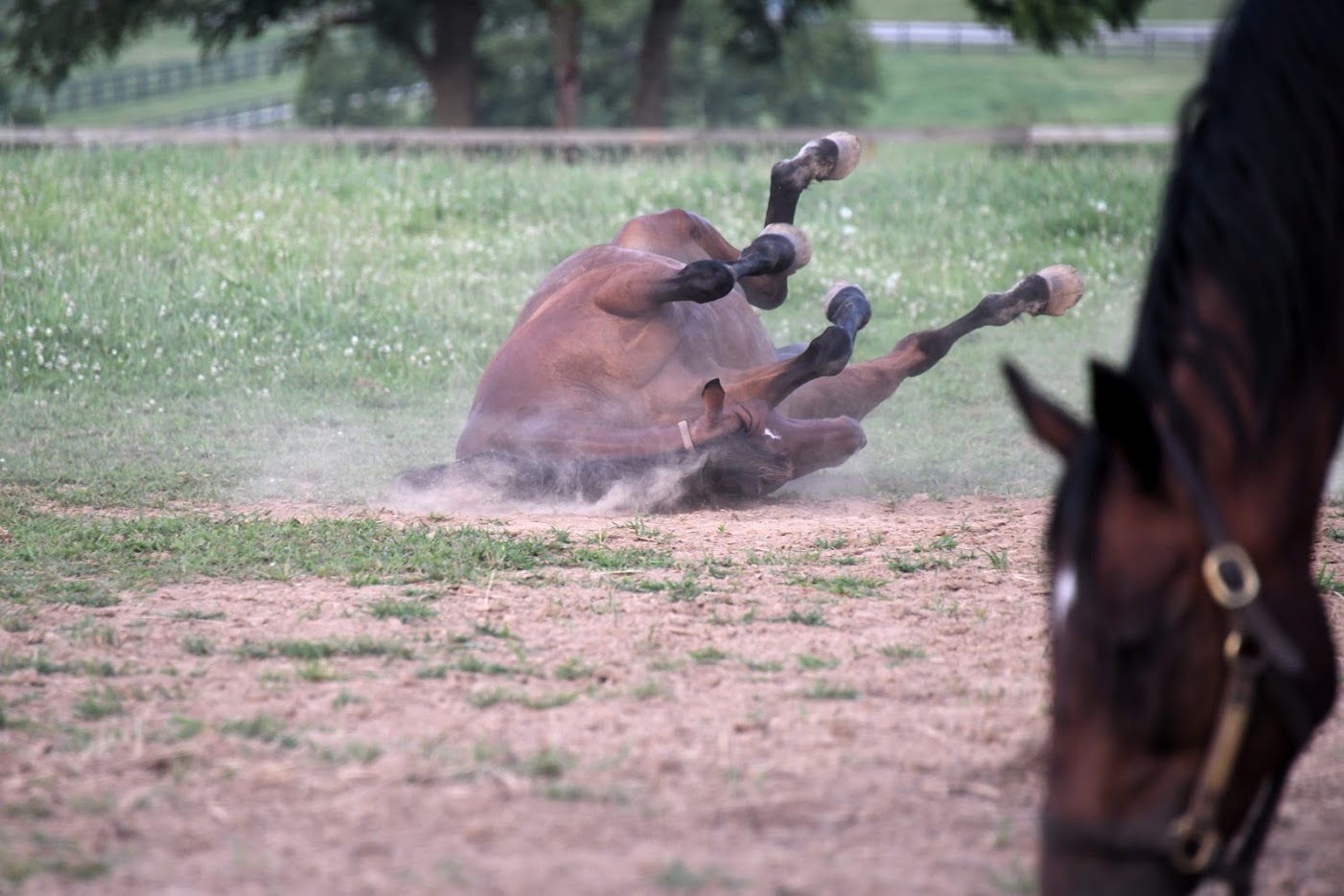 He Loves Me Not has a dustbath. 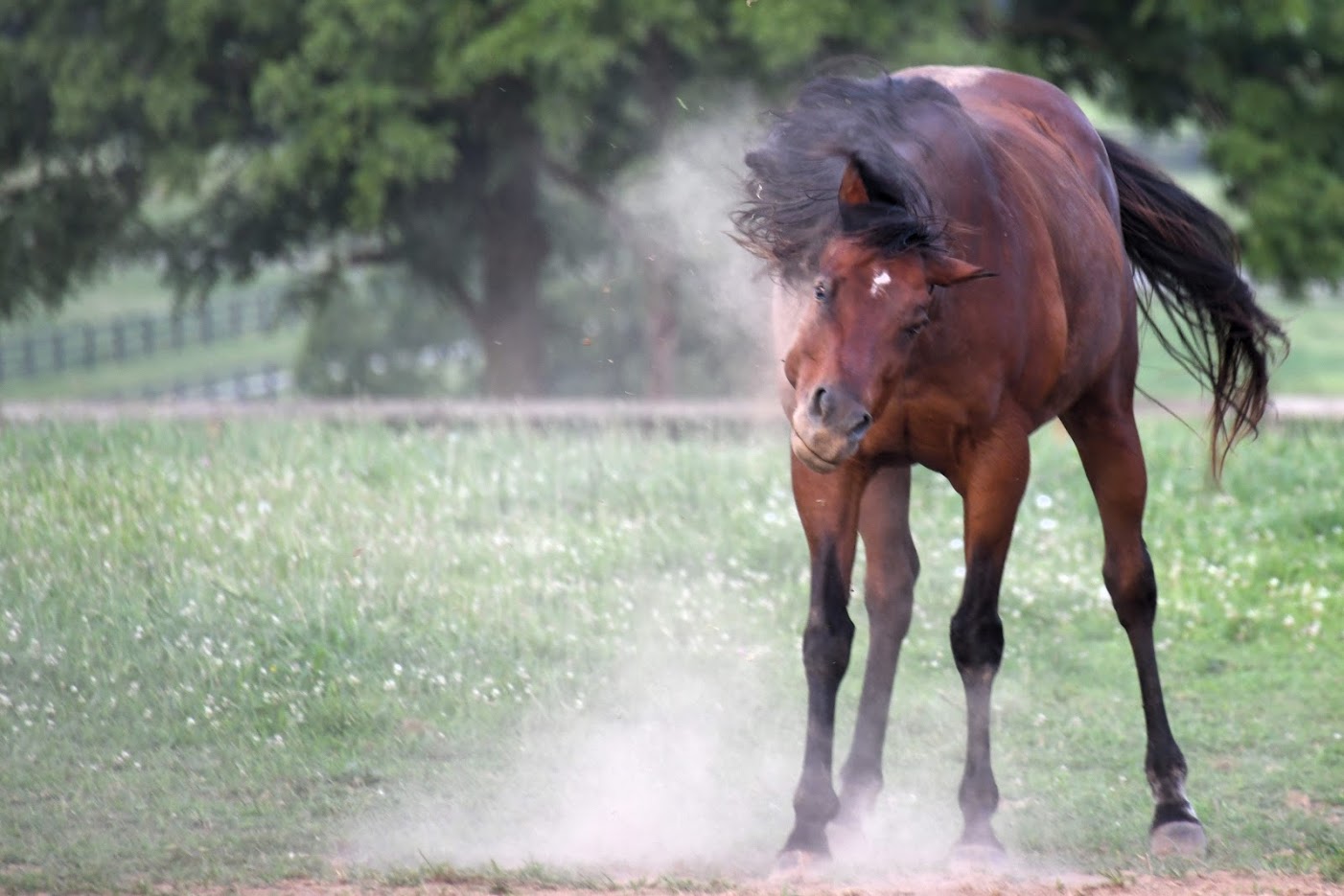 So come on over to Old Friends this summer and hang out with us! 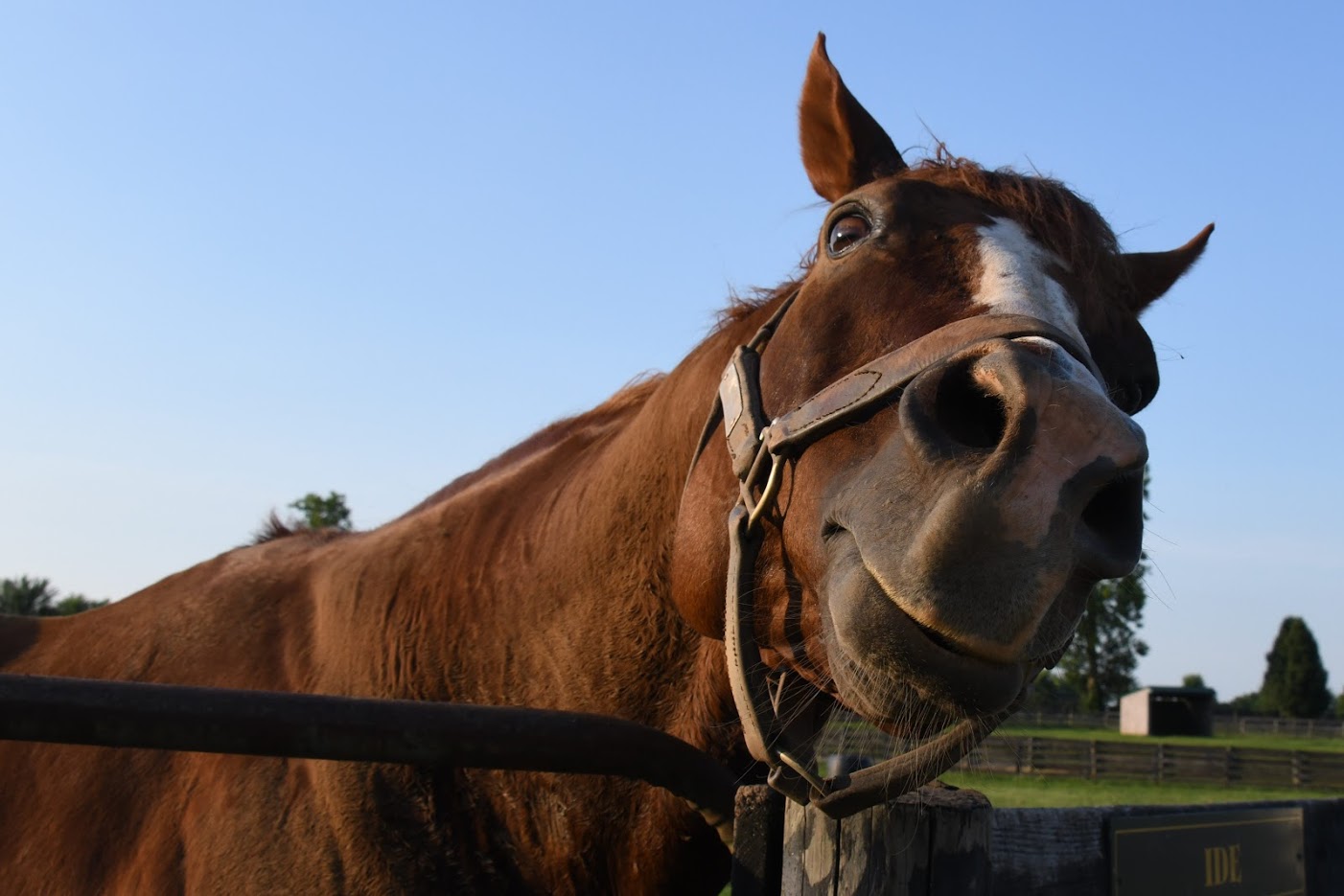 We had an amazing weekend at Old Friends.
Saturday was Wise Dan Day!

Thanks to the generosity of Charlie and Amy LoPresti, the two-time Horse of the Year made a personal appearance at Old Friends’ party in his honor to benefit our retirees.

For many of his fans it was as much a reunion as a celebration of his greatness. Dan’s home track was Keeneland, just down the road. In his four-year race career he often thrilled us there and at Churchill Downs in Louisville.

As Saturday approached we’d sold many tickets. Our anticipation grew. At last, the day arrived. Worries about rain dispelled under a bright summer sky. At 1:30, as the 1:00 tour was visiting Game On Dude and Little Mike, up the drive rolled the LoPrestis’ trailer. And who was gazing out the window but the champion himself.

Little Mike raised his head, looking at him as if to say, “Hey, about that 2012 Male Turf Championship award…” Wise Dan and Little Mike never raced each other since they specialized in different distances, but they did meet briefly at a ceremony in the Churchill Downs paddock honoring 2012 Breeders’ Cup winners Wise Dan (Turf Mile), Little Mike (Turf), Groupie Doll (Filly & Mare Sprint), and Fort Larned (Classic). But this Saturday Wise Dan had places to go and people to meet. He rolled on up the hill.

He unloaded, got comfortably settled in, and at 2:00 the gate opened and the party began.

As you can see, at 12 years old Wise Dan is absolutely superb. Three other qualities about this horse stand out immediately and powerfully. His intelligence, his strong bond with his trainer Charlie and Amy with whom he makes his permanent home (as does his multiple graded stakes winning half-brother, Successful Dan), and his remarkable blend of high spirits and kindness.

In case you missed his race career and wonder what all the fuss is about, get this:

Wise Dan (Wiseman’s Ferry – Lisa Danielle by Wolf Power (SAF)) was bred (2007) and raced by Morton Fink and trained by Charlie LoPresti. He was American Horse of the Year in 2012 and 2013. He also took Champion Turf Male and Older Dirt Male honors in both those years. That’s six Eclipse Championship awards in all.

After some time with his fans outdoors, Dan and the rest of us retired to cooler quarters in the barn, where Dan continued to greet his many friends up close, posed for photos with them, and got a few carrots into the bargain.

It was great of Wise Dan and his human family to stay with us for two full hours. It made for the perfect party, never too crowded at any one time but with a steady stream of fun and interesting people for Dan to meet.

Lexington’s Channel 18 covered the event, and Wise Dan’s visit to Old Friends featured on the NBC Sports Network that night. Though other stars, even two Triple Crown winners, have come along since his racing days, Wise Dan remains a legend.

5 minute feature about Wise Dan from the Keeneland Magazine, Spring 2013