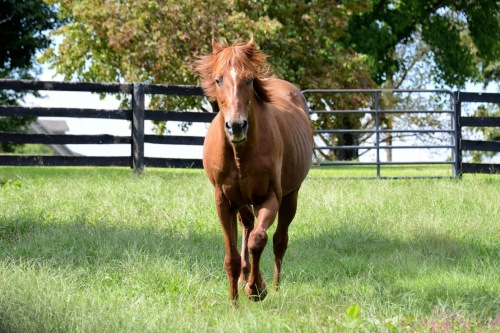 Whether in triumph or defeat, Geri’s quickness and courage were memorable. His victories include the 1996 Oaklawn H (G1) and Creme Fraiche H (G3) on the dirt, and the 1997 Citation H (G2) and Woodbine Mile on the turf. He showed exceptional heart when he missed winning the 1997 Caesars International H (G1) by a nose, and no less in the 1997 Breeders’ Cup Mile (G1) where undaunted by being outrun by one horse he bested the rest with a determined charge.

But how to find words to describe Geri as a friend? He could be dictatorial, temperamental, but he inspired in those who knew him an enduring love. Not just for his flamelike beauty and unconquerable spirit, though he had those qualities in abundance. 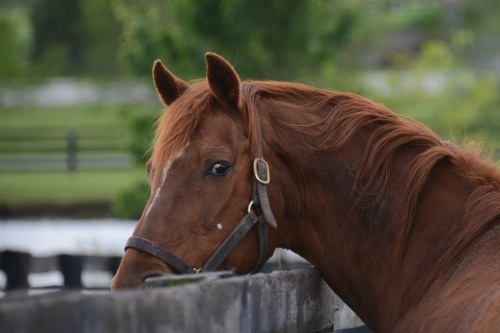 In his own way Geri was affectionate. If he liked you, he was possessive. He expected to be catered to, but he’d often return the favor. He’d walk away to show his independence, make a circle and walk back to you. If you walked, he’d follow. He wasn’t very tolerant of petting, but he adored having his mane combed. His eyes would close. Blissful relaxation would come over his face, his ears, and finally his whole body. Then you could stroke him, drape your arm over him, and if horses could purr, he would’ve.

I think the hardest thing for Geri was when his front teeth had to be extracted. A few years ago he developed a painful dental condition and the extractions relieved his discomfort. But he liked to bite, and when he lost that way of enforcing respect he moped for a few weeks. “Really, Geri?” we asked him. “You can rear and run like the wind, and you imagine you don’t impress us anymore?” Soon he realized he still commanded our full respect and perked up. He ate wetted feed, grazed normally, enjoyed his hay, and on tours got specially shredded carrots. And when in the mood, he gummed us.

He liked watching the mares across the road at Summer Wind Farm and hanging out by the fence near his fellow retirees. His particular buddies over the years were Mixed Pleasure, Alphabet Soup, Albert the Great, and off-and-on, Sun King. He and Ide peaceably ignored each other.

Geri napping in the warm sun. (Or girl-watching?)

Geri never lost his enthusiasm for meal times, and at 27 his body condition was perfect. We hoped we’d have his companionship for years to come. But colic is cruel in its suddenness. Antonio, Selso, all of us tending him, hoped he’d recover. To Dr. Waldridge treating him at Park Equine Hospital and Michael who was with him there, it seemed he would. But that was not to be.

His empty paddock seems like a hole in the universe.

But I hope all of you who loved Geri will join me in taking comfort that he was well cared for during his whole life. On his last morning he was tended by those who loved him, and he knew it.

Michael, who was Geri’s racetrack fan before becoming his friend, shared these insights:

“Geri was as competitive and haughty a Thoroughbred as ever set hoof on our farm. From his days as a stakes winner to his final days in his paddock by the pond, his formidable intelligence and iron will never wavered. Like Theatrical, his sire, Geri’s good looks couldn’t disguise his internal fire.”

Interesting how descriptions of Geri so often include the word “fire.” Fittingly so. He was an elemental.

We don’t have to compose an epitaph for Geri. Shakespeare already did.

He is pure air and fire.

The big mare herd isn’t at all the same without Santona. Chilean champion filly, dam of stakes winners, and boss mare extraordinaire, Santona mattered wherever she went and whatever she did.

When her careers as racehorse, then mom, were done and owner Earle Mack enabled Santona’s retirement to Old Friends, Santona settled in as if the farm was hers. Soon the mares she moved in with were very much hers, and she reigned over them absolutely right up to the end. Being herd animals, horses find security in a consistent social order, and the wise old mare always provided that. 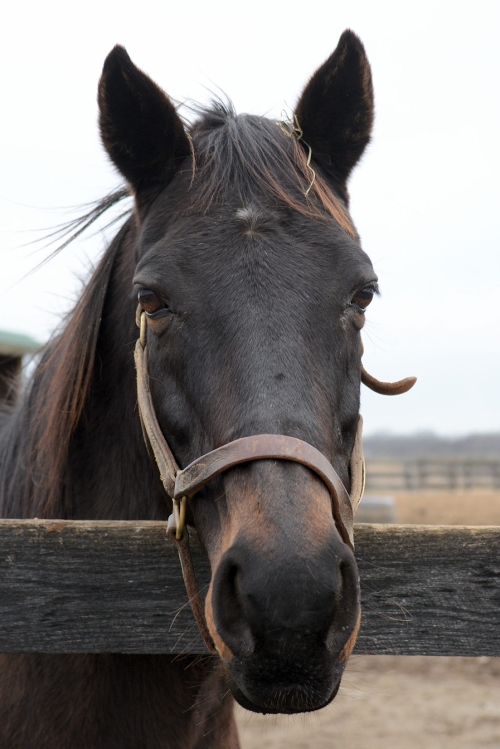 With people, Santona was a bit bossy too, but friendly and kindly, a horse who enjoyed attention and behaved with intelligent, confident benevolence. Her responsiveness and gentleness with her visitors was unfailing.

It’s odd how much smaller her herd seems without her, as if in losing Santona we’d lost not one but several horses. Though a big mare physically, it was in personality that Santona was larger than life. 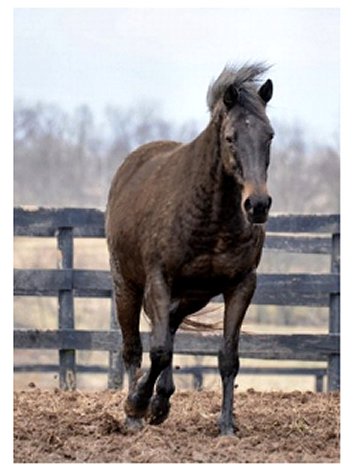 It’s Miss Hooligan who misses her the most. “Miss Hoolie” was an old timer with us when Santona arrived, and for awhile she couldn’t seem to make up her mind whether she wanted to be Hidden Lake’s friend or Santona’s. Once she chose Santona, she stuck by her faithfully.

As you can see from this photo of her with Euronfire, Miss Hooligan gets along well with the other girls and won’t be without friends (horse and human), but just now it’s a little tough for her I think.

As it is for Carole, Antonio, Laura, and all who had the privilege to know and help care for Santona. She was a truly considerable personality, one of a kind.

Rick Capone has shared with the blog these four more great photos of Santona. Thank you, Rick! 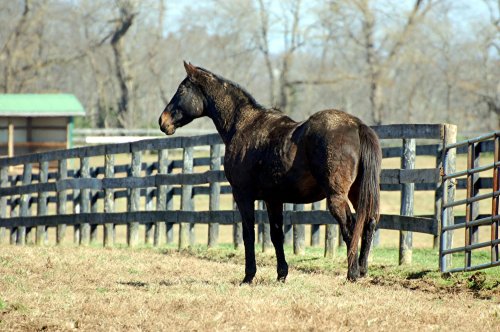 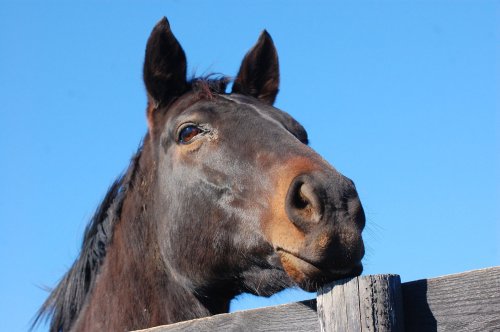 Rick is, of course, the author of History of Old Friends and the sequel, Celebrating Old Friends, both available through our gift shop.

On this Kentucky Derby day, the twentieth anniversary of 1999 Kentucky Derby winner Charismatic’s victory, we lovingly remember the brilliant racehorse and bright, proud, friendly stallion who all too briefly lit up the farm with his presence.

With joy we celebrate the Kentucky Derby winners and contenders living at the Georgetown farm today. For all of them, this is their day, the anniversary of a wonderful achievement, competition in the most legendary race in America, the Kentucky Derby.

Silver Charm and War Emblem were visited on Thursday by the their mutual trainer, Bob Baffert. Busy as he is readying his impressive current trainees, Mr. Baffert, as usual, looked in on his two retired Derby victors at Old Friends, and of course visited Game On Dude and his other former trainees.

Though only one horse emerges as winner, competition in the Derby is limited to the best of the best three year olds, and having run in a Kentucky Derby is, in itself, a high honor. So today we celebrate our wonderful guys… 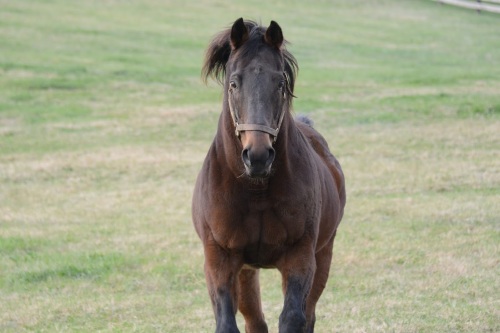 Afternoon Deelites also got a visit from a sharer in his old glory, Kent Desormeaux, who rode him in the ’95 Derby and in all his races, including a number of graded stakes wins.

Eye of the Tiger, 2003 Derby competitor 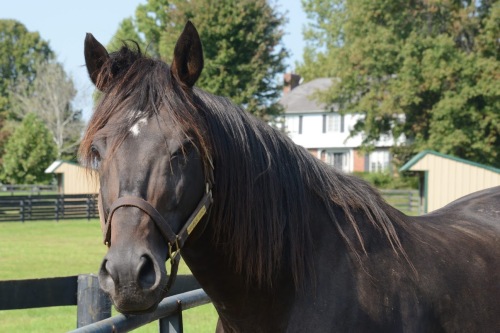 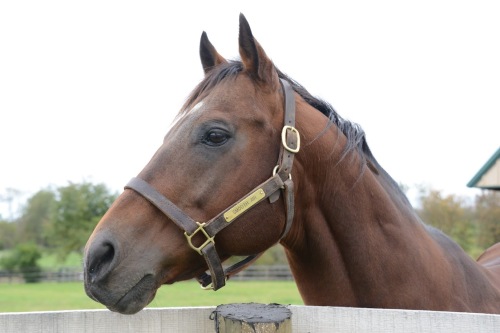 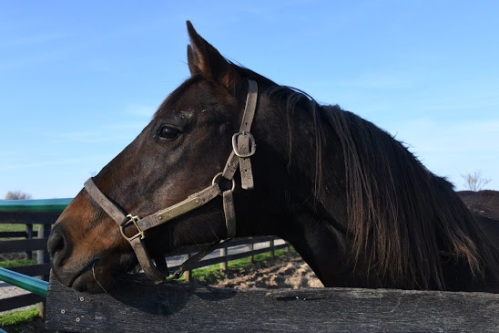 While our Derby heroes may occasionally reflect on their past, this week they’ve been happily busy greeting the many visitors who’ve come to share this season and the beautiful spring weather with us.

They’ve all done a wonderful job meeting, greeting and wowing their guests through this busy week. All of us, horses and humans, look forward to sharing our Annual Homecoming Event with you tomorrow (Sunday, May 5, all afternoon). We hope to see you there!

Beth
all photos except Easy Grades are Laura’s