He did race once as a three year old and took eight more tries at age four. He achieved a win in a maiden claiming race at Belterra Park in Cincinnati for his owners, breeder Sally Thomas and trainer Lee Rossi. But he was short on the competitive spirit so important to a racehorse. Among horses, as among humans, those who don’t relish athletic competition don’t suceed at it. Brilliant Decision didn’t.

But he’s got qualities that will make him appreciated at Old Friends. He’s one of the sweetest horses ever to set foot on the farm. This morning was overcast and my snapshots don’t do him justice, but I hope you can make out that he’s also absolutely handsome. 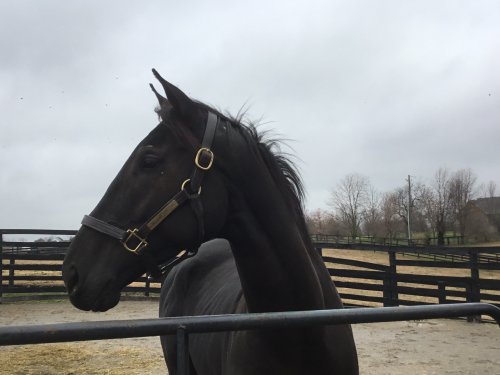 This morning was his first turn-out. Here he is taking in all the new sights.

Brilliant Decision is doing the quarantine that’s routine for all new arrivals, so he’s not getting hand-fed or touched on the tours yet, but if you schedule a visit in the next three weeks you can take a look at him and say hi to him in the barn. Which gelding herd he’ll eventually join hasn’t been decided yet, but whether he’s on the main tour route or in an outlying paddock accessible for private tours, a horse as friendly and kind as he is will enjoy your visits and attention.  I think Brilliant Decision’s real talent is love.

“Hey wow, what’s this Old Friends place all about?”

Old Friends is grateful to Lee Rossi for enabling Brilliant Decision’s new lifestyle with us, and to breeder Sally Thomas who kindly kept us in the loop about him and his late mom, whose final surviving son he is.

And while I’m posting my not-so-great snapshots, here’s one of another relative newcomer who’s been with us a few months but whose photo I haven’t yet included in a post.

Right to Vote, another really sweet guy, had a highly successful race career, earning more than half a million dollars and winning stakes races at Chuchill Downs, Oaklawn Park and Prairie Meadows for B J D Thoroughbreds, trained by Ron Moquett. However it happened, three years after his racing days ended, Right to Vote became an unwanted horse. Old Friends is grateful to Mr. Moquett who came to the rescue of the long, tall gelding and enabled his retirement to Old Friends.

Right to Vote is a son of Political Force out of What a Knight by Tough Knight. He also happens to be a great-grandson of our much-loved former resident Glitterman (1985-2011). He’s joined the gelding herd that also includes Joey P, Racketeer and Geronimo.

While I’m at it about new guys, the latest about Diversify and Slim Shadey is that they’re now sharing a paddock across from Right to Vote & gang and are getting along nicely. So are Hogy and Soi Phet…you’d think we’ve turned into a retirement home just for tall, dark sweetheart geldings, but Silver Charm, Ide, Saudi Poetry and Alphabet Soup assure me that’s not so. Though temperatures are dropping, they all look forward to a visit from you. Come see them on our winter schedule, tours daily at 11:00 am, or schedule a private tour at whatever time’s best for you.

Excellent achievement by Storm the Court, who won the 2019 Breeders’ Cup Juvenile. He did his grandpa Gulch proud!

And wow, has Touch Gold ever been getting congratulations around here! Not only did his great-grandson Spun to Run win the Dirt Mile, his grandson Vino Rosso won this year’s Breeders’ Cup Classic.

Touch Gold, who at 25 looks as if he could have won the Classic himself.

Eye of the Tiger is family too, like Vino Rosso having been bred by the Gunthers.

Our warmest congratulations to all our supporters who have connections with this year’s Breeders’ Cup champions! And no less to all those whose competitors ran equally valiant races! We’re prouder than we can express to be associated with you.

Our utmost sympathies go to the connections of Mongolian Groom. Racing, like skiing, football, eventing, surfing, and so many sports, will never be without risks. That doesn’t ever make a loss any easier. Yet, if the alternative were a world without the courage and spirit of Thoroughbreds–and without racing what would become of the 9.2 million in America?–that would be a world too destitute of beauty to contemplate. Instead, let us all do our best to continue to improve safety where we can and to provide for the flourishing of these magnificent animals during and after their racing careers.